Broad streets, baroque buildings and open squares – Erlangen is known as one of the best preserved baroque cities of Germany and appeals with a very special atmosphere. The city, as it is known today, was built in the 17th and 18th century, following almost complete destruction during the Thirty Years’ war. Huguenots, who left France because of political persecution, contributed strongly to the rise of the small but thriving town.

During those times, the Friedrich-Alexander-University was founded in 1743, serving today as Alma Mater for roughly 40,000 students, in the smallest city of Bavaria with only little more than 100,000 inhabitants. Accordingly, Erlangen’s appearance is dominantly characterised by the university and its students. 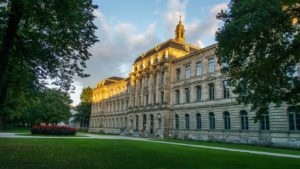 Kollegienhaus, one of the oldest university buildings, demonstrating the baroque appearance of Erlangen

The natural science faculty was founded, relatively late, in 1928. Therefore, a lot of famous alumni such as Georg Simon Ohm or Felix Klein were members of the philosophical faculty. Nowadays, most of the faculty of natural sciences “NatFak” is situated at the south of the city and is together with the Max-Planck-Institute for the Science of Light a strong research institution. The GPT will be hosted in the lecture halls and seminar rooms of the department of physics.